Johnny Gent was at Terry before he started his tenure at Famous, and I'm trying to find out what he did on those early 40s films.

I think this piece, from Champion of Justice (1944), is his work. I really like the animation of the nephew here, and the posing and timing looks like Gent's work. Anyone else agree? Disagree?

There's a slight discrepency with this film's release date, as it is within a few months from the first cartoon he animated at Famous on. Gent said he worked on Mighty Mouse when he was still Super Mouse, so who knows.


Popout
Champion of Justice
Uploaded by thadk
No comments:

Here's a clip from The Helpless Hippo (1953), featuring one of Tyer's brilliant shrink-takes. I wonder, what are those little black 'sticks' left behind when a character runs off in many Tyer scenes? My guess is that it might be pieces of lead left on the drawings by this eccentric guy!

Mighty cartoons tend to be better when he's actually in the whole cartoon, and not just the last two minutes. Too bad it didn't happen often.

Yeah, I know, it's been too long since the last one!

Here is a scene from one of the better Mighty Mouse cartoons (I should know, having sat through about 50 of them recently), The Reformed Wolf (1954), featuring the antics of a mentally-challenged sheepdog and a schizophrenic-sounding wolf. Mighty is more fun to watch when it looks like he's just having fun abusing his enemies.

I'm not sure who animated the scene before Tyer comes in. Paging Milton Knight!

(Thanks to Andrea for this and the next few Mighty Mouse posts)
No comments:

Lots of folk claim that many of the things that made cartoons fun were sucked out by the Disney influence. While for the most part, this is true, but there were a few directors that said "screw the Disney influence" and went ahead with doing a hybrid of sort of cartoony animation (and gags) with sophisticated designs. Clampett, Avery, and Tashlin in particular.

I don't think the Disney influence was bad. I can't stand most of the early 30s cartoons save the earliest Boskos, Iwerks Mickey, and Irv Spence Flip the Frog I actually enjoy. But there were really great principles in those films that made them animation fun. I'm actually glad the influence came in, because it made those who excelled with using it, like Jones, all the better, while Clampett, Tashlin, and Avery remained unique with the preference for broad, cartoony actions.

The ducks in these two clips from Booby Hatched (1944) still move in the stylized way Tashlin originated and Davis animated, but there is a lingering remainder of the bounciness from the old 30s cartoons. See if you can spot it!

Great timing in animation is extremely hard to do, and it's even harder to make it unique.

The thing that's always stood out to me in Frank Tashlin's 1940s cartoons is how stylized the movement is. Daffy in particular always moved beautifully.

In other directors' cartoons, characters snapping from pose to pose looks cheap with a lot of brush blurs, and in the case of Freleng and McKimson's shorts, badly drawn. The animation in Tashlin's shorts is unique and unlike any other director's in the history of Warners.

Lots of animation in Tashlin's shorts seem to use leftover drawings, but it's pieced together so well it looks more like it's intentional than an error. In my opinion, Tashlin was as every bit exaggerated (or 'cartoony') as Clampett, only Tashlin was more sophisticated, while Clampett took a more sophomorphic approach to it (that is not a bad thing).

Art Davis seemed to be Tashlin's favorite animator, or at least his best one, as he is behind all of those great scenes of sophisticated 'cartooniness'. These techniques are seen nowhere in Davis' own films of the late 40s, nor in his animation for Friz, so it goes to show you what a great director and a great animator are capable of when they are working at their full potential.

These two clips are from one of my all-time favorite cartoons, Plane Daffy (1944). Look at how beautiful Daffy is in these scenes! Go out and buy the new Looney Tunes set, because it's worth it just for this cartoon, and the other Tashlin shorts, alone. 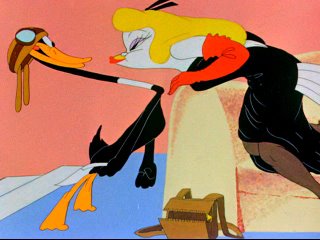 Sorry for the lack of posts lately, folks. My laptop is in the shop for repairs and an uncle passed away earlier this week, so I have been a little preoccupied.

I'll have a review of the new Warner Golden Collection up soon, which outside of the Frank Tashlin disc, was slightly disappointing. Oh and some updates to this blog too are in store as well. 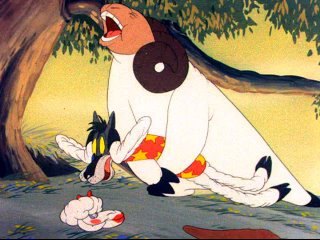 Speaking of Tashlin, I have a whole bunch of posts planned about him and his top animator, Art Davis, and what makes his cartoons so unique and amazing. Hopefully in the next week or so, things will be in order.
No comments:

I've written about Hawkins' delay timing in the past... Here is another great example of how he takes a scene of dialogue and weaves his magic through it, from Riff Raffy Daffy (1948).

A problem that's existed ever since the mid-50s in animation is the abundance of 'talking heads'. This started coming in with Chuck Jones' "illustrated radio" shorts, but it really didn't take off until the advent of television with Hanna-Barbera's first shorts.

All cartoons, theatrical or otherwise, have relied on verbal humor and dialogue far too much ever since.

Back in the "good ol' days", masters like Pete Burness and others were able to make their talking scenes interesting, because they would add their own little tricks to them.

This is a scene from one of Friz Freleng's Tweety cartoons, I Taw a Putty Tat (1948). I believe this is Burness' first piece of animation for Warners, though he was uncredited. Watch Sylvester's head in this scene for Burness' trademark bouncy animation, along with the neat detail of Tweety's hat bouncing off his head as he jumps with joy, 'unaware' of Sylvester's intentions.

It's easy to tell when Pete or Emery is animating on a Freleng cartoon because it's usually the best looking animation in the short.


Popout
I Taw a Putty Tat
Uploaded by thadk

Burness, along with Emery Hawkins, were at the 'bottom' of the Warners pecking order, so they weren't tied down to one unit, and would often go without screen credit.

Here's Burness handling a classic exchange in Chuck Jones' Haredevil Hare (1948), another short he was uncredited on. This gag has been used countless times throughout animation history, but it was never as funny looking.