The Mouse Comes to Dinner

Tom mistaking this for innuendo is priceless. And the bit with him putting the moves on Toots is great too.

Ray Patterson gets more footage than usual to do in this film which makes it all the better. I believe his is the only animation that doesn't get a huge boost from Scott Bradley's fantastic scores.


- Fade-in to "Boy that's a beautiful table" : Pete Burness
- "Sure hope nothin' happens to it before the company gets here" to Jerry burning his ass on the spoon : Ken Muse
- Jerry melting the butter to Tom grabbing Toots : Irv Spence
- 'Wolf pacifier' to Tom lighting match on Jerry's ass : Ken Muse
- Jerry picking up pie to Tom getting cherry pie in face : Ray Patterson
- Jerry running off to Tom getting poked in ass with wine bottle : Burness
- Tom getting hit with pastry to Tom going through ceiling : Patterson
- Toots and Jerry running away to iris out : Muse

I should also add that I was actually able to rip this one from the official Tom & Jerry DVD collection. Amazingly this wasn't redubbed or edited, so it was 'useable'.
No comments:

Haven't seen one of these in awhile, have you?

I think by now you all should know what DVNR looks like (in case you've forgotten click here and here). So I'll just be posting some more examples of how DVNR has been destroying the Golden Age of animation. 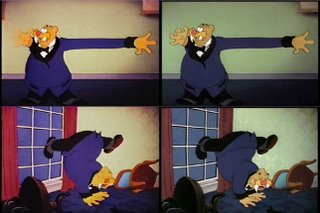 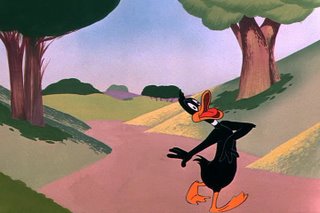 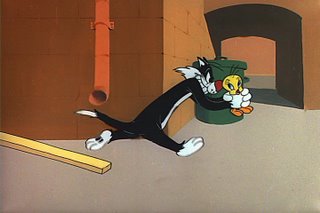 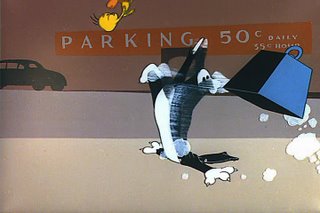 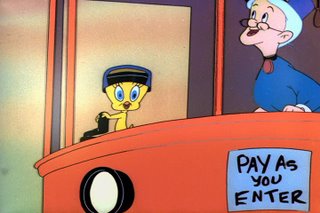 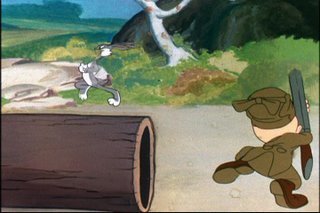 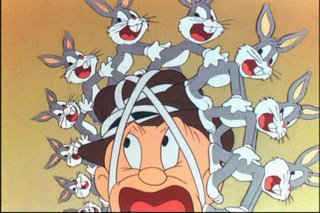 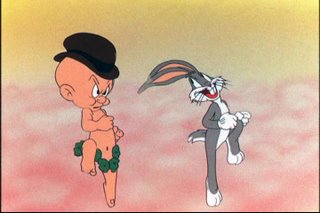 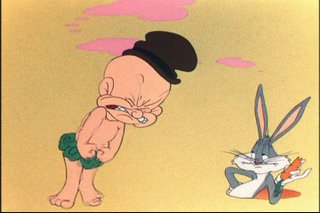 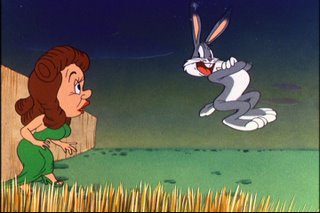 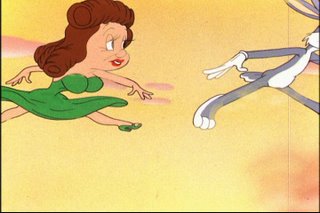 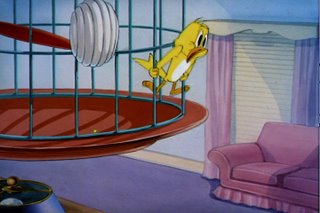 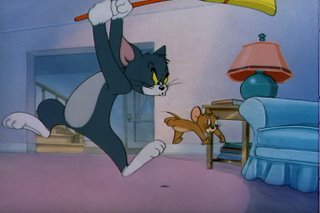 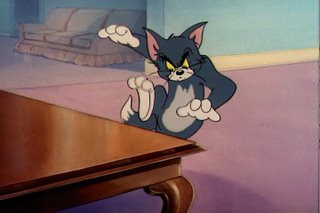 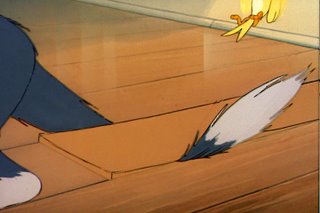 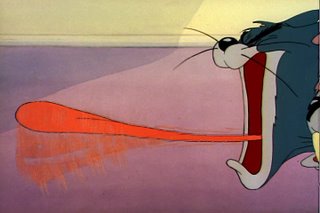 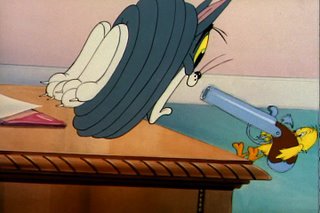 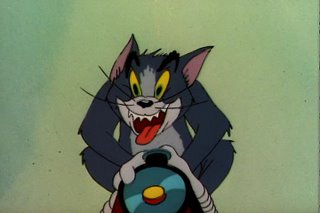 PETER PAN: SPECIAL EDITION
Yes, Disney used it too. It's nowhere near as severe as the shorts, but this movie has been mutilated color-wise ever since it came to home video. DVNR just adds insult to injury. 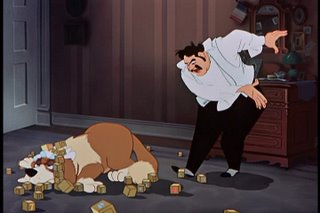 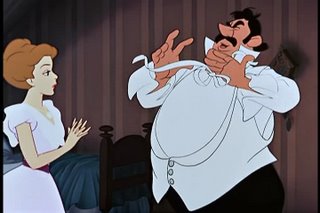 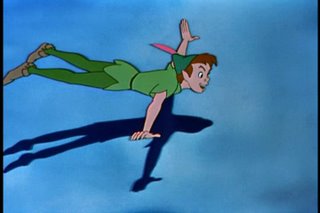 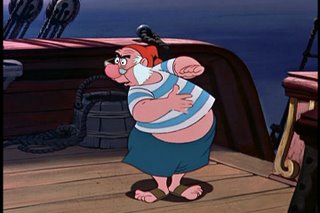 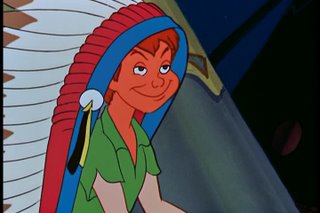 So what can we do about it? Luckily there are people who care at the studios, whether you think so or not. George Feltenstein at Warner Home Video (and in charge of the Golden Collections) despises DVNR as much as I do, and beginning with Vol. 3, there has been minimal DVNR on the sets (it still showed up on "The Last Hungry Cat" and "The Bear That Wasn't" though).

"Falling Hare" was one of the first pre-1948 titles remastered for DVD. Luckily they caught this one and were able to restore it properly. The left is what you have on your DVD. The right is what you would've gotten.

This has been a public service announcement.
No comments:

HEY, GRANDMAAAA!!! I brought a little bunny rabbit for ya! TA HAVE!!!


Time for a breakdown of one of my all-time favorite cartoons. I seriously question your sense of humor if you don't find this one funny.

Mike Kazaleh broke this one down too!

- Wolf throwing other wolves out to scooting Red out : Gil Turner (favorite aspect of Turner here is that he seems to make the Wolf slobber whenever possible)

- Wolf looking in basket to Bugs sending him offscreen : Jack Bradbury (My personal favorite here. It looks a lot like his comic work.)

- Wolf running around in circles to Bugs knocking on his head : Ken Champin

- Bugs runs into other room to Wolf backing Bugs into wall : Gil Turner

- Wolf tip-toeing into dark room to Bugs about to drop the flower : Jack Bradbury

- Red being placed under the pile to iris out : Virgil Ross

Some things I realized watching this cartoon again:

1. It's the best cartoon Friz ever did (largely in thanks to Mike Maltese).

2. It's one of the best cartoons ever made.

4. Billy Bletcher seems to be having a hell of a fun time in this one. "Put on your old grey bonnet..."

5. Despite it ending with Bugs saving the Wolf and placing Red over the coal, he doesn't come off as a jerk, since it comes more from his personality than say, driving a dog to suicide or burying Elmer Fudd alive.

6. Gil Turner went on to become, as I like to call him, the "Carl Barks" of Zeke Wolf. I've always wondered why he looked so different in Turner's comics than from the actual Disney shorts, and now I know why. He learned to draw the Big Bad Wolf from "Little Red Riding Rabbit"! 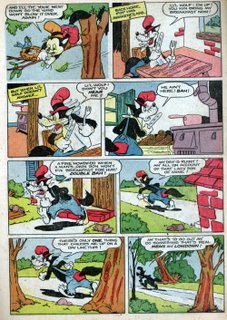 A defining page from one of Gil Turner's Wolf stories.
Appeared in WALT DISNEY'S COMICS & STORIES #85 (Oct. 1947).
No comments:

This highlight from Bob McKimson's "The Up-Standing Sitter" (1948) was animated by Manny Gould. Gould is responsible for all the arm waving/swinging in McKimson's shorts of this period.

Here's the lyrics typed out for good measure:

Life is bitter,
For I'm a sitter,
And put little kiddies to bed,
While I tuck the sheets,
Around their feet,
They're busy slappin' my head.

They throw their trains,
And rattle my brains,
My head is full of dents.
No wonder I'm sour,
Goes on by the hour,
And each hour I earn fifty cents.

Now it'll be stuck in your head all week.
No comments: