[All identifications made by Mike Kazaleh]

Today's post may be known as one of the most obscure posts in animation blog history!

Mike Kazaleh has been gracious enough to help me identify a few animators' styles in the Screen Gems cartoons of the 1940s. One of the best is Grant Simmons, who did some incredibly funny and slick animation throughout his whole career (up to his untimely demise in 1971). He was at Screen Gems for much of its 1940s run.

The first short up is a rare classic, "Flora". In this great film noir parody, the character designs are full of Simmons' influence, particuly with 'Ronny'. Simmons animated the scenes where:
- He eats the chocolates
- Drinks the martini by the mantle
- Looks in the window and sees 'Flora', rings bell, tips hat, butler hits him with mallet
- Sits on bridge, jumps, and hangs from bridge

The second film was released under the Walter Lantz banner by Universal, "Broadway Bow Wow's". This, and "Dig That Dog", were made independently by the Grantray studio, Simmons and Ray Patterson's post-MGM studio. Lantz gave them the go-ahead to write and direct several theatrical cartoons for him. There was no need for them to hire their own music director or background people since Lantz people needed the work. Lantz went so far as to have have a complete budget worked out for every facet of these two cartoons, but was shrewd enough to be sure he obtained ownership of them outright. (copied and pasted from The Walter Lantz-O-Pedia, which I co-run)

After watching this film, you'll see how jarringly similar these two shorts are, mainly in the design of the dog, and the framing device.

Ray Patterson definitely animated the opening and closing sequences on the bridge. Simmons animated the short sequence from "My ears began to ring.." to "She had me going in circles...", the shot of John crying at the racetrack, then running off screen, the shot of him swallowing his pride where he walks away rubbing his ass, and the shot of him yelling in the theatre and getting grabbed by the usher. Patterson may have animated the rest of the cartoon. 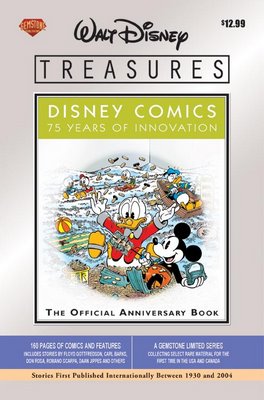 This comic gets Gemstone's Resident Curmudgeon's SEAL OF APPROVAL!!!
Waddle over to your comic shop or Amazon and buy it! ...
For Pete's sake!